Last week, Vladimir Putin and Xi Jinping met in person for the first time since February 4. When they spoke more than six months ago, the mood appeared rather different.

On that occasion, the two kindred authoritarians produced a Joint Declaration proclaiming a “partnership without limits” and presented the outlines of a formal entente against the West. China and Russia would stand for a multipolar, “democratic” world, not one of overwhelming American and allied power.

Did Xi’s and Putin’s second conversation, on September 15 at the Shanghai Cooperation Organization (SCO) summit, change anything?

Xi, Putin stated, had “concerns” about the war in Ukraine, while Xi himself never once mentioned Ukraine. Combined with anecdotal evidence of Xi’s supposed displeasure and Russia’s public rebukes in the SCO, some Western analysts have rapidly concluded that the Sino-Russian entente is off.

This conclusion comes from poor analysis. In fact, Xi’s statement, and its surrounding actions, indicate tacit acceptance of Russia’s war. The Sino-Russian entente flourished, even more so than in February. The West risks being hoodwinked by wishful thinking.

Begin with the argument against Sino-Russian cooperation. It identifies early March as a breaking point. Putin informed Xi of his intention to invade at their February 4 meeting. Xi accepted the invasion, although he requested that Russia wait until after February 20, the Winter Olympics’ concluding date. Putin moved four days later.

However, Xi was misled. Putin certainly revealed the full scope of his intentions to Xi, the conquest of Ukraine to the Transnistrian border, its reduction to a nominally sovereign rump state ruled from Lviv, and the remainder’s absorption into a reconstituted Russian empire with the economic, numerical and strategic mass to confront the West directly.

But in the event, Russia’s invasion stalled. It captured Kherson in the war’s first week, and fanned out into the south, surrounding Mariupol and creating a land bridge to Crimea. But the decisive thrust, a daring airdrop at Hostomel Airport to facilitate a dash on Kiev that triggered mass panic and shattered the Ukrainian government, crumbled.

Meanwhile, the West has coordinated a sanctions regime, military budgets are rising and the United States’ open support for Taiwan is growing – all because of Putin’s botched war.

Russia’s de facto protectorates in Central Asia – Kazakhstan, Uzbekistan, and the other post-Soviet republics – are increasingly vocal in their opposition to the invasion: They possess Russian-speaking minorities whose protection the Kremlin could also claim as an excuse to swallow them.

In turn, Xi has his own priorities that cut against Russia’s. Not only has Western unity demonstrated the likely costs of attacking Taiwan, but open support for Russia today would also trigger Western secondary sanctions that would cripple the Chinese economy just as Xi faces the 20th Communist Party Congress, the closest event China has to a high-level election.

After two years of draconian anti-Covid measures and with a metastasizing housing crisis, Xi has no interest in supporting a losing player. The Zhongnanhai will not burn alongside the Kremlin. Xi will snap up Russian oil and gas, but at artificially low prices, reducing the economic benefit the Kremlin receives while forcing it to transact in renminbi.

At most, China will pick the choicest morsels of meat from the Russian imperial carcass. Xi will leave the core, Putin and his siloviki to their fate, and watch as Russia disintegrates.

Proponents of this argument point to three aspects of last week’s Xi-Putin meeting to support their case.

First, Putin admits that Xi has “concerns” about the “special military operation” that he will answer. Second, Putin explicitly mentions his support for China’s position on Taiwan, while Xi does not mention Ukraine. Third, Xi contends that China, along with Russia, can set examples as “responsible global powers.”

In light of Indian, Uzbek and other remarks on the war, this is taken as a veiled indictment of Putin’s aggression. In all, the exchange is read as a stinging rebuke of the Russian position.

The argument’s core premises, then, are that China, for economic and strategic reasons, cannot condone Russian actions and for simple tactical avarice will accept and quietly aid Russia’s collapse. 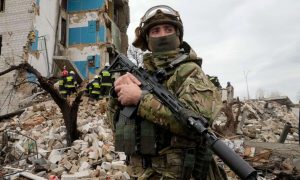 A Ukrainian soldier stands against the background of an apartment house ruined in the Russian shelling in Borodyanka, Ukraine, on April 6, 2022. Image: Screengrab / ABC News