Anyone who listened to Vladimir Putin’s TV broadcast to his nation on September 21 had to be shocked by the Russian leader’s tone, incoherence and threat.

US President Joe Biden, in a speech to the UN General Assembly, only made matters worse, not better, by putting all of the burden unequivocally on Putin’s head.

There are many impacts from these events, including the bitter possibility of a wider war that will spill over into Europe.

Both Biden and Putin seem to think they can play this kind of poker. Not only will they both lose, but the world will be greatly endangered.

To take the view that the only outcome in Ukraine is win or lose, and that if Russia loses it may use weapons of mass destruction or the Russian government may collapse into chaos, is not in anyone’s interest.

We are at a moment more dangerous than the Cuban Missile Crisis, the closest the Cold War came to escalating into a full-scale nuclear war.

Sad to say, but the US president does not seem to grasp the danger or understand his responsibilities. Biden’s reckless verbiage is not a contribution to peace.

Nor are the various proclamations from Europe’s leaders or from NATO. Putin’s statements are even worse. Instead of incendiary rhetoric, we need practical and workable solutions to the crisis in Ukraine and in Russia. 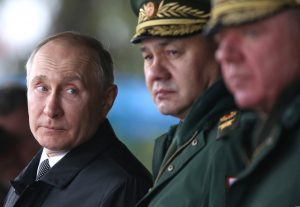 Who knows who may be lingering in the shadows if Russian President Vladimir Putin is overthrown? Image: Twitter